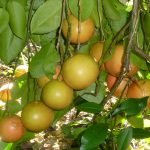 The grapefruit (Citrus × paradisi) is a subtropical citrus tree known for its relatively large sour to semi-sweet, somewhat bitter fruit. Grapefruit is a citrus hybrid originating in Barbados as an accidental cross between two introduced species – sweet orange (C. sinensis), and pomelo (or shaddock) (C. maxima) – both of which were introduced from Asia in the seventeenth century.

When found, it was nicknamed the “forbidden fruit”. Frequently, it is misidentified as the very similar parent species, pomelo. The grape part of the name alludes to clusters of fruit on the tree that often appear similar to grape clusters. The interior flesh is segmented and varies in color from white to yellow to red to pink. he evergreen grapefruit trees usually grow to around 5–6 meters tall, although they may reach 13–15 m. The leaves are glossy, dark green, long (up to 15 centimeters), and thin. It produces 5 cm (2 in) white four-petaled flowers. The fruit is yellow-orange skinned and generally, an oblate spheroid in shape; it ranges in diameter from 10–15 cm. The flesh is segmented and acidic, varying in color depending on the cultivars, which include white, pink, and red pulps of varying sweetness (generally, the redder varieties are the sweetest). The 1929 U.S. Ruby Red (of the Redblush variety) has the first grapefruit patent. The name “grapefruit” seems to originate with the way that, unlike normal citrus, the fruits of this tree grow in “clusters”, vaguely reminiscent of bunches of grapes. The genetic origin of the grapefruit is a hybrid mix. One ancestor of the grapefruit was the Jamaican sweet orange (Citrus sinensis), itself an ancient hybrid of Asian origin; the other was the Indonesian pomelo (C. maxima). One story of the fruit’s origin is that a certain “Captain Shaddock”[8] brought pomelo seeds to Jamaica and bred the first fruit, however, it probably originated as a naturally occurring hybrid between the two plants some time after they had been introduced there. Currently, the grapefruit is said to be one of the “Seven Wonders of Barbados”.

The grapefruit was brought to Florida by Count Odet Philippe in 1823 in what is now known as Safety Harbor. Further crosses have produced the tangelo (1905), the Minneola tangelo (1931), and the oroblanco (1984). The grapefruit was known as the shaddock or shattuck until the nineteenth century. Its current name alludes to clusters of the fruit on the tree, which often appear similar to that of grapes. Botanically, it was not distinguished from the pomelo until the 1830s, when it was given the name Citrus paradisi. Its true origins were not determined until the 1940s. This led to the official name being altered to Citrus × paradisi, the “×” identifying its hybrid origin. Kimball Atwood An early pioneer in the American citrus industry was Kimball Atwood, a wealthy entrepreneur who founded the Atwood Grapefruit Company in the late nineteenth century. The Atwood Grove became the largest grapefruit grove in the world, with a yearly output of 80,000 boxes of fruit. It was there that pink grapefruit was first discovered in 1906. From Wikipedia