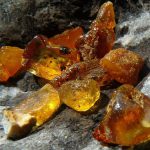 Amber (from Central Low German: Börnesteen, i.e. “Brennstein”) is a fossil resin that comes from an extinct plant species that has not yet been finally identified. By far the most common type of amber is succinite, of which there are estimated to be more than 640,000 t in the Baltic States.

Amber has been processed into jewelry in the Baltic Sea region for millennia and exported as a raw material to the cultures of the Mediterranean. Egyptian handicraft objects made from Baltic amber were found over 6,000 years ago. Emperor Nero consumed it massively. Just like today in India and in the rituals of the Sufis, succinite was also smoked due to its fragrant essential oils.

Amber charges itself electrostatically due to friction and was therefore used in ancient times to purify the air from dust particles. The ancient Greek word for amber is ḗlektron (ἤλεκτρον, translated roughly: “light gold”) and the eponym for our word electricity. The islands of the Baltic Sea, from which the old amber roads moved south, were called “electrids” in Greece.

Aristotle already suspects a vegetable origin. But it was only in the middle of the 18th century that the Russian scholar W. Lomonosov succeeded in scientifically proving amber as a fossil tree resin. Its extraordinary properties – flammability, light transmission (in polished condition), electrostatics, coloring – predisposed succinite in many cultures to a mythical stone, the gold of the north, tears from the Heliades, an amber castle in the Lithuanian history around Jūratė and Kastytis.

In addition, amber often contains inclusions of extinct animal and plant species (around 4,500 per tonne in Bitterfeld’s succinite), which – from Martial to Jurassic Park – have always stimulated scientific and poetic imagination.

“The amber hides and shows the bee darbey;

It seems that she is covered by her honey.

You would not have bought a beautiful grave,

So she probably wanted to die here. ”