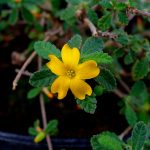 Turnera diffusa, known as damiana, is a shrub native to southern Texas in the United States, Central America, Mexico, South America, and the Caribbean. It belongs to the family Passifloraceae. Damiana is a relatively small, woody shrub that produces small, aromatic flowers. It blossoms in early to late summer and is followed by fruits that taste similar to figs. Damiana loves dry, rocky open locations. It is often found on limestone, on cliffs or in mixed forests at altitudes between 500 and 1950 meters. In the north, the range extends to the United States. This species can be found there in California and Texas. To the south, the distribution area extends across Central America across the Caribbean islands to Argentina. The main areas of distribution are in Baja California and northern Mexico. This species is rare in Guatemala.