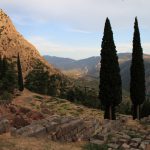 C. sempervirens is a medium-sized coniferous evergreen tree to 35 m (115 ft) tall, with a conic crown with level branches and variably loosely hanging branchlets. It is very long-lived, with some trees reported to be over 1,000 years old. It is also known for its very durable, scented wood, used most famously for the doors of St. Peter’s Basilica in the Vatican City in Rome. In classical antiquity, the cypress was a symbol of mourning and in the modern era it remains the principal cemetery tree in both the Muslim world and Europe. In the classic tradition, the cypress was associated with death and the underworld because it failed to regenerate when cut back too severely. The poet Ovidrecords the best-known myth that explains the association of the cypress with grief. The handsome boy Cyparissus, a favorite of Apollo, accidentally killed a beloved tame stag. His grief and remorse were so inconsolable that he asked to weep forever. He was transformed into cupressus sempervirens, with the tree’s sap as his tears.