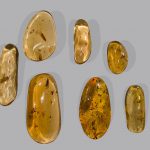 Copal is a name given to tree resin from the copal tree Protium copal (Burseraceae) that is particularly identified with the aromatic resins used by the cultures of pre-Columbian Mesoamerica as ceremonially burned incense and other purposes. More generally, the term copal describes resinous substances in an intermediate stage of polymerization and hardening between “gummier” resins and amber. The word copal is derived from the Nahuatl language wordcopalli, meaning “incense. Copal is still used by a number of indigenous peoples of Mexico and Central America as an incense, during sweat lodge ceremonies and Sacred Mushroom ceremonies. It is available in different forms, e.g.: The hard, amber-like yellow copal oro from South America, the white copal, a hard, milky, sticky substance, from Mexico; the green and dusty citroln like Copal Saumerio from Peru. By the 18th century, Europeans found it to be a valuable ingredient in making a good wood varnish. It became widely used in the manufacture of furniture and carriages. Subfossil copal is also well-known in New Zealand (Kauri gum),  East Africa, Japan, the Dominican Republic, Colombia and Madagascar. It often has inclusions and is sometimes sold as “young amber”.