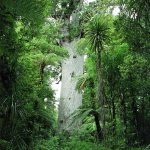 Agathis australis, commonly known by its Maori name kauri, is a coniferous tree of Araucariaceae in the genus Agathis, found north of 38°S in the northern districts of New Zealand’s North Island. Kauri forests are among the most ancient in the world. The tree has smooth bark and small narrow leaves. Agathis australis can attain heights of 40 to 50 metres and trunk diameters big enough to rival Californian sequoias at over 5 metres. The largest kauri trees did not attain as much height or girth at ground level but contain more timber in their cylindrical trunks than comparable Sequoias with their tapering stems. Although today its use is far more restricted, in the past the size and strength of kauri timber made it a popular wood for construction and ship building, its resin, in the late 19th and early 20th centuries, a valuable commodity particularly for varnish. Most is produced by tapping trees; however, some is collected in fossilised form from the ground. The gum varies in colour from clear to pale yellow, while the fossilised form is grey-brown. The word Dammar means in the Malaysian language light, the gum is a triterenoid resin, containing a large number of triterpenes and their oxidation products, its scent when burnt fresh and lemonlike.