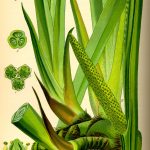 Acorus calamus (also called sweet flag or calamus, among many common names) is a species of flowering plant, a tall wetland monocot of the Acoraceae family, in the genus Acorus. Sweet flag is a herbaceous perennial, 30–100 cm (12–39 in) tall. In habit it resembles the iris, and has given its name to the flag iris, I. pseudacorus. It consists of tufts of basal leaves that rise from a spreading rhizome. Sweet flag is native to India, central Asia, southern Russia and Siberia, and perhaps Eastern Europe. It also grows in China and Japan. It was introduced into Western Europe and North America for medicinal purposes. Habitats include edges of small lakes, ponds and rivers, marshes, swamps, and wetlands. A. calamus has been an item of trade in many cultures for thousands of years. It has been used medicinally for a wide variety of ailments, and its aroma makes calamus essential oil valued in the perfume industry. The essence from the rhizome is used as a flavor for pipe tobacco. When eaten in crystallized form, it is called “German ginger”. In Europe Acorus calamus was often added to wine, and the root is also one of the possible ingredients of absinthe. The Bible mentions its use in the holy anointing oil ( Exodus 30: 23). Although probably not native to Egypt, this plant was already mentioned in the Chester Beatty papyrus VI dating to approximately 1300 BC. The ancient Egyptians rarely mentioned the plant in medicinal contexts (the aforementioned papyrus mentioned using it in conjunction with several ingredients as a bandage used to soothe an ailment of the stomach), but it was certainly used to make perfumes.