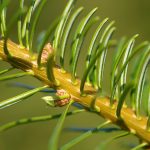 Abies nordmanniana, the Nordmann fir or Caucasian fir, is a fir indigenous to the mountains south and east of the Black Sea, in Turkey, Georgia and the Russian Caucasus. It occurs at altitudes of 900–2,200 m on mountains with precipitation of over 1,000 mm. The current distribution of the Nordmann fir is associated with the forest refugia that existed during the Ice Age at the eastern and southern Black Sea coast. In spite of currently suitable climate, the species is not found in areas of the Eastern Greater Caucasus, which are separated from the Black Sea Coast by more than 400–500 km. The Nordmann fir is one of the most important species grown for Christmas trees, being favoured for its attractive foliage, with needles that are not sharp and do not drop readily when the tree dries out. It is also a popular ornamental tree in parks and large gardens, and along with the cultivar ‘Golden Spreader’ has gained the Royal Horticultural Society’s Award of Garden Merit. The tree has also in Europe been used for reforestation as a way to mitigate expected forest decline caused by climate changes. The wood is soft and white, and is used for general construction, paper, etc.